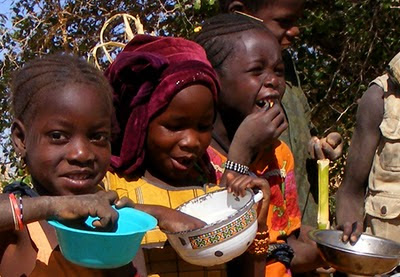 Why isn't this a more common sight?
These aren't starving African children at an aid station, eating donated rice. They aren't sick, they aren't covered with flies, they aren't malnourished.

These are healthy, happy African children in a desert climate, cheerfully eating African food from their families' gardens, good, nutritious, native food that doesn't require irrigation and that doesn't fail completely when the rains don't come.

It is not a difficult concept: There would be no people in those areas, if it were not possible for the land to support them. Starvation and famine are the result of encouraging people to plant non-native cash crops that will not thrive.

I've blogged about the Eden Foundation before, which I discovered through a website I was alerted to not because of the good work they are doing, but because Esther Garvi, whose family founded the program and who grew up in rural Niger, has a Rhodesian ridgeback whose pictures she posts on her own blog.

Now my cyberfriend and fellow ridgeback owner has started a new blog that is inspiring, informative and an absolute delight: www.edengardens.org 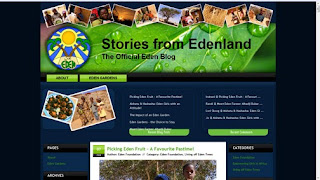 There you can see delightful pictures of her neighbors and read short accounts of their lives. The Eden approach is a way of thinking about, and of respecting, native people that needs to spread. As stated in the "About" section of the blog, "From the very beginning, Eden’s purpose has never been to tell people how to live their lives, but to supply them with options that will enable them to achieve a sustainable life, independent of external assistance."

In the past year, there were news reports that the rains had not come, the millet crop had failed and the poor people of Niger were reduced to eating leaves.

It sounded so dire, but, knowing the work of the Eden Foundation, I wondered. After all, I eat leaves regularly: Lettuce, cabbage, artichokes, spinach ... Could I be starving and not even know it? 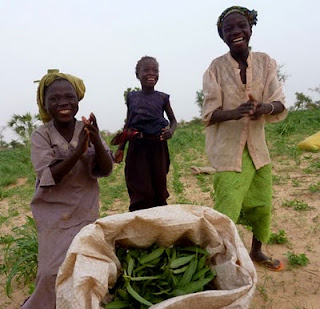 Esther addressed the topic in a post and identified these particular leaves as malahiya, which she notes is not only delicious itself but can be sold at a good price in the city.

I try not to be too cynical, but when I contrast the approach of setting up aid stations (pulling people off their land instead of encouraging them to farm efficiently) with the Eden approach of helping people to learn to be self-supporting, it's hard not to look upon calls for international assistance with a wary eye.

Perhaps there are places where the Eden approach cannot work, but, again, I would have to ask, how did people live there for thousands of years, before there were trucks and airplanes and large bags of grain to be distributed?

In any case, Stories from Edenland is going on my daily bookmark list because I like to read about things that work and to see pictures of smiling children.
Posted by Mike at 8:14 AM

I remember when you first introduced us to the Eden Foundation. Thanks for the update - bookmarked.

That makes too much sense to possibly work.

ronnie: I just added a link to that original blog posting, for anyone coming late to the conversation.

And, yes, it makes far too much sense, Brian. But remember, it only worked for several thousand years.