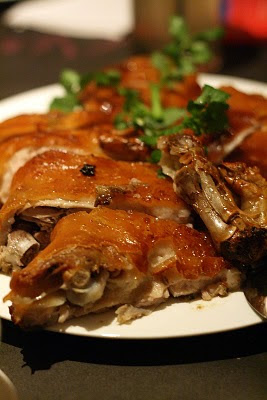 Middle-aged pornography
I've just added a friend of a friend at Facebook and discovered a luxurious website. The friend-of-a-friend is Jacoba Budden, who kept saying funny things in response to postings by South African cartoonist Jeremy Nell. With all the excitement over the World Cup, the comments on Jeremy's site became a little more universal, a little less based on local issues, and -- for some reason -- a little more often posted in English instead of Afrikaans, and I became curious about this witty woman.

So I "friended" her and discovered her website, Just Food Now, which is a combination of history, culture and recipes that I find fascinating. I told Jacoba, "Your site is a bit like Playboy for the middle aged -- sumptuous stuff that makes my mouth water even though I know the odds of, for instance, a roast suckling pig ever actually appearing on MY table. The difference being, of course, that your site tells exactly how you get your dishes to look like that, a subject Playboy tends to avoid."

She was amused enough to ask permission to quote me, but there is certainly more than a small ring of truth to it, at least in the sense that, no, I'm not going to make a roast suckling pig, which is the lead recipe in her fascinating roundup on German cuisine. (And wasn't she a genius to know they'd beat England and stay in the tournament even longer?)

On the other hand, it is a defendably intellectual fantasy. I like knowing how you roast a suckling pig, or make spaetzle, even if I'm never going to do it myself. In fact, one of my backburner projects is a story set in 16th century Germany, and so there may actually be a material benefit involved.

But it hardly matters. It's fun to just visit the site and see what she's got going on, or leaf through the archives and find other foods you've heard of but weren't 100 percent clear on.

Yes, I really do read the articles!
Posted by Mike at 1:57 PM 2 comments: Links to this post


Best sixth grade talent show act I've seen in months
I may be coming to the party late. This kid's video has had over 26 million hits and he got a shot on "Ellen" during which Lady Gaga called to tell him how cool he is. But I don't watch "Ellen" and I don't cruise YouTube for videos of kids singing, so I didn't see this until I was doing an article for Internet Safety Month and stumbled over it at a kid-safe video site ("Kideos").

More World Cup, more nostalgia
Back in the olden days, during the last World Cup, I put this together. I thought of it today watching Nigeria/Argentina because it's the first game I've seen between two teams who really like to play up to the refs with dramatic dives, exaggerated pain, mystified outrage and other theatrics.

What I'm doing these days is similar to what I was doing back then, but Nellie was a voice I don't use now, and that's okay with me, but it was a fun time.

As for the World Cup, the histrionics add an element to the matches that helps create a rooting interest when you have no loyalty to either nation. Either that, or you can enjoy it as a science-fiction movie about a sport played by the world's biggest, most-coordinated 8-year-olds.

(click on the pic for a larger version)
Posted by Mike at 11:02 AM 4 comments: Links to this post


A little Tuareg music
I posted a link to this band, Tinariwen, which played at yesterday's World Cup Concert, over at Comic Strip of the Day.com and thought I'd share it here, too. They stirred up a lot more excitement than Alicia Keys, The Black Eyed Peas and Shakira.

Have a listen.
Posted by Mike at 8:20 AM 4 comments: Links to this post 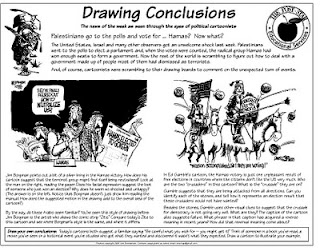 Those who don't remember history lessons
are condemned to repeat the course
There seem to be so many observers of the past week's news who are not aware that Hamas is the legally elected government of the Palestinian territories that I thought I'd post some things I wrote for schoolchildren, the first in January of 2005, the second barely a year later, in February, 2006.
As your teacher might say, "If you've been doing your homework, none of this should be new material ... "
Or, more specifically, "You get partial credit for identifying Hamas as not being very nice, but I expect your essays to reflect more knowledge of the situation than just that."
(Click for larger versions)
Posted by Mike at 9:54 AM No comments: Links to this post