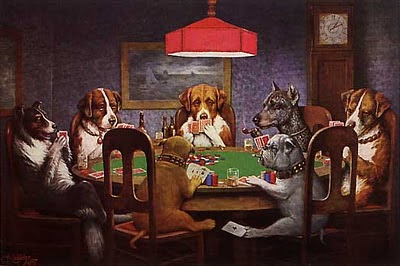 While hair was cut, male generations were joined
(This column originally ran in the Press-Republican, Plattsburgh, NY, June 12, 1994, 50 years after D-Day)
"The next generation is coming, and they need to know what happened," D-Day Veteran John Bacon told the Press-Republican. "Guys like me won't be around for the next 50 years to tell about it."

Of all the hundreds of thousands of words about D-Day over the past few weeks, none were more important than those: The next generation needs to know what happened, and there is only so much time left to gather the stories.

My grandfather was old enough to remember the first automobile in Ironwood, Mich., and lived long enough to see mankind walk on the moon, but he didn't tell many stories. He felt only old men did that, old men who bored their children with endless reminiscences of the Good Old Days.

My father has left more behind him, in the form of letters and a journal. And I will, no doubt, leave my children a haystack of published and unpublished memoirs to deal with when I'm gone.

But passing on stories from father to son, or grandfather to grandson, is not the same as passing on a cultural legacy from generation to generation.

For that, you need a marketplace, somewhere for the generations to meet.

Much of what I know about being a man, I learned at the barbershop. Women talk about the stories and lore that were passed on when women quilted, and there is even a play called "Quilters."

Maybe we need a play about men, called "Haircut."

There were two barbers in Star Lake, too many, really, for such a little place, and you had to choose to give your trade to Bob or to Charley, both of whom you knew, both of whom you would see at church, both of whom had children in school with you. Both of them were even school bus drivers.

You had to call them "Mr. Noody" and "Mr. Henry," but you thought of them as Bob and Charley, because that's what all the men at the barbershop called them.

When I was little, we went to Bob Noody, because it was handier for our dad to pick us up on his way home from work. The three of us took the bus there after school, got our hair cut and then sat and waited for our ride, while we looked at Sports Afield and listened to the men talking.

Bob had a picture on his wall of dogs playing poker, and another humorous picture depicting some hunting trip disaster. There were placards of combs and butch wax you could buy, and his barber college certificate hung on the wall. There wasn't much girlie stuff around; Bob's shop was attached to his home, and, anyway, he had more class than to have a lot of junk around the place, what with all of us kids coming in to get our hair cut.

I'm sure the jokes and stories were different when we weren't around, of course, because there were times someone would start to say something and Bob would cough and cock an eyebrow in our direction and then everyone would chuckle and pass on to another topic.

The men talked about hunting and fishing, about baseball and hockey, and about politics. And they talked about the war.

There was more than one war, of course. I was a middle child in my family, so my dad went to World War II. Some of my friends were the oldest in their families; their dads had been in Korea. Some of the older men had been in World War I.

One time, they got to talking about World War II, and Bob stopped cutting hair for a moment to pull up his trouser leg. He had a couple of round scars on his legs, about the size of quarters, from where he got shot while he was parachuting. Later, my dad told me Bob was a Ranger, and that the other guys in the army all knew the Rangers were the toughest guys around. I remember the tone of respect, almost awe, with which he spoke.

That made me look at Bob a little differently. He was kind and he always had a twinkle in his eye when he said hello to you, and he always had something special to say to you, on the bus or in church or whenever he saw you away from the barber shop. He always let you know that he was your friend, and that you were his friend, too. I think he was as pleased as I was, the day I was finally tall enough that I didn't need him to put the padded board across the arms of the barber chair.

I thought guys who jumped out of airplanes and shot people were mean and tough, but Bob wasn't mean at all. But, if he was a Ranger, that meant he was tough. It made me stop and think that maybe being tough isn't the same thing as being mean.

I don't know if there is anything more important for a boy to know than that.

I talked to my mom the other day, and she said Bob saw some of his friends on television, the guys from the 101st Airborne who were going to jump again on D-Day. Bob didn't go back to Normandy, but I'm sure he gave it more than a brief thought.

My dad didn't get to Europe until sometime after D-Day, and his stories from the war had less to do with combat than with hungry, frightened people left in the wake of the Nazi defeat. But I knew something of D-Day because of Bob, and being at Bob's barbershop.

It's ironic that, when my generation's war came along, we stopped going to barbershops. It wasn't a political decision; it was a question of fashion. We had our girlfriends cut our hair, because they knew more about dealing with long hair than the barbers did, back then.

Today, the barbershops are nearly gone. I don't know that either of my boys have ever been in a real barbershop, "real" in the sense of having Sports Afield on the table and pictures on the walls of dogs playing poker. "Real" in the sense that your mother might drop you off, but she wouldn't come in.

"Real" in the sense that a boy got a lot more at a barbershop than just a haircut.

Great article, Mike. We still have a few real barbers around here. My boys go to the barber that I saw in much younger days.

Along with the usual sports magazines, he used to have a 18" stack of comic books. Most were read to the point of almost falling apart.

It was and is a world apart.

That's a unique male experience - the female beauty salon thing just does not parallel it. Never has.

I'm wondering if there's a story behind the 2004 photo, too. Either way, it's cool to see that he was (is?) still around, and to see a great smile!

In fact, Ruth, there is: When my mother (the capital-R Ronnie) turned 80, we threw a community-wide party that also celebrated 50 years living there. There were lots of flowers and cakes and a lot of great friends, some of whom I hadn't seen in decades. Bob was someone I saw regularly when I was back in town, at various chicken dinners and other celebrations, but it was great to see him again!

I talked to my mom the other day, and she said Bob saw some of his friends on television, the guys from the 101st Airborne who were going to jump again on D-Day. Bob didn't go back to Normandy, but I'm sure he gave it more than a brief thought.

He actually did go back and he's going again ...there are a lot of online articles about his trip that you might enjoy looking at if you do a search for them. VERY interesting!! He's my uncle and we had no idea growing up about any of this .. we only learned about it after his first trip there.