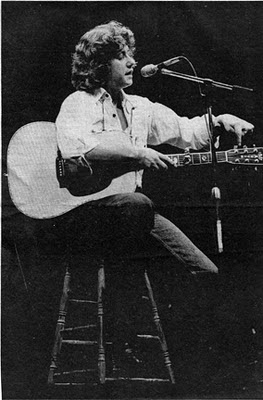 Arlo Guthrie, Colorado Springs, Nov. 1980
This interview appeared in the Colorado Springs Sun, Nov. 21, 1980. The photos are by Scott Wright. I interviewed Arlo by phone the morning before the concert, then went to hear Tom Hayden speak on campus at Colorado College. Before the talk began, Arlo walked in and sat down behind me and we ended up talking for another 20 minutes or so. He's really a what-you-see-is-what-you-get kind of guy. A few weeks after it appeared, I got a nice letter from Arlo's mother, Marjorie, which I thought was very cool.
Arlo Guthrie is a genuinely nice man.

After at least three other interviews and an energetic, substantial concert in the evening, he is standing backstage undergoing yet another cross-examination, this time by an earnest young student who wants to know if he thinks there will be an American war in the Persian Gulf.

He smiles his Arlo smile and takes a sip of beer, then begins an Arlo spiel in that same funny Arlo cadence so familiar from ''Alice's Restaurant" and "Reuben Clamzo." Is he serious? Does he really believe that we're contemplating a military annexation of Mexico to solve the energy crisis and the illegal alien problem in one fell swoop? The interviewer isn't certain, and jokes a little, but not too much ....

Twelve hours before, the cadence wasn't there. Maybe it only comes on after concerts. But when he was talking about his father and the hard-hitting biography, "Woody Guthrie: A Life," that has just hit the bookstores, his voice was lower, his tone serious, without the "ain'ts" and the "gonnas" that sprinkle his language in lighter moments. He has read Joe Klein's no-punches-pulled work.

"That's a really good book," he enthused with an almost salesman-like exuberance.

But wasn't it painful for the family?

Woody Guthrie's bout with Huntington's chorea is detailed without gloss or euphemism, from the sudden outbursts of violence to the daily continuing examples of behavior so bizarre that friends deserted him and rumors spread of alcoholism and advanced venereal disease, even after the nature of his illness was known. It must be very difficult to read about your father in this manner, when to most of the world he is still the happy, guitar-slinging little hobo.

"Well, one of the nice things about the book is that it makes up for that joke of a movie and some of the other things like that." In Arlo's world, it's better to be reminded of painful truth by Joe Klein than to endure the lies in David Carradine's fairytale," "Bound For Glory."

Both the title of Carradine's movie and the glorification of Woody Guthrie bring back a song in which Phil Ochs said of Woody;

Now they sing out his praises on every distant shore,
But so few remember what he was fighting for.
Why sing the songs and forget about the aim?
He wrote them for a reason; why not sing them for the same?"
Ochs and the elder Guthrie had a kinship of their own: Both were topical singers in troubled times.

Woody Guthrie sang for the communist groups who were the organizers of labor unions in the '30s. His famous "This Land is Your Land" was written as a working man's version of "God Bless America," a version that would express love for the country without pretending that everyone in it had a good job and enough to eat.

Phil Ochs wrote civil rights and anti-war songs in the '60s and, together with Arlo Guthrie, was called as a witness at the trial of the Chicago Eight, though neither was allowed to testify.

The most chilling similarity, however, is that both balladeers became increasingly unstable towards the ends of their lives and lost most of their friends. Ochs committed suicide; Guthrie died in a hospital.

Arlo brought out an important point about Woody, however: "Phil was so interested, so driven to be attached to the anti-war movement, to the civil rights movement, that when it became less faddish, he was left without an identity. My old.man always retained his identity and brought it with him to the groups he was involved with, and it was who he was and what he thought of himself that was always getting him into trouble with them.
"It wasn't a case at all of trying to gain an identity by fitting in with a group. My father never fit into organized movements, he never fit in really with the communists."

Perhaps the communists' were too humorless, took too utilitarian an attitude towards life? 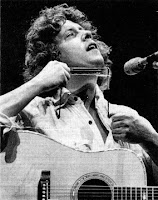 "Not the people he was with," Arlo is quick to correct. "In fact, the only real criticism that has emerged about the book from my father's contemporaries is that Joe Klein was too hard on the Old Left, primarily because he was writing from a vantage point of 20 years of hindsight. He exaggerates somewhat and leaves the impression that they were really naive dupes.
"It's not that they had such a feel for communism so much as the personal involvement in those particular goals of social justice and so forth. Everything he says is true, every fact in there is right, but the facts he recites aren't counterbalanced by a feeling for the powerful personalities of the people involved. For them, it was a personal ideology, a desire to see a world where the rich guy wasn't always hitting the little guy over the head all the time."

So that whole group, so hard hit by the McCarthy hearings, weren't really communists after all?

"Well, to this day, if you ask Pete Seeger about his communist days, he invariably says, 'Well, you know, the American Indians are communist.” You can call it communism, but it's a lot more than simply a matter of the system in which the state relates to the individual. It's a way of life, no matter what you call yourself.
"All those people, you have to ask yourself, would they fit into a Communist system as it exists, say, in Russia? And you have to answer certainly not. Woody Guthrie, Pete Seeger, Leadbelly, those guys would be just as rebellious over there as they were over here. Which wouldn't work out for them.
"So when Phil Ochs and those people came along in the '60s, they realized this, but they didn't know what they should call themselves. They decided on 'New Left,' so you had the New Left and the Old Left, who were just as committed to the same things they'd been doing all along."

Arlo Guthrie is less dogmatically political in his art than either his father or more recent "topical" singers; but isn't afraid to sing from a soapbox on occasion, as he did last Thursday night: He assailed nuclear energy with a song that shares its tune with a multitude of old songs including one that was a campaign song for Harrison and Tyler in 1840. A traditional tune, certainly, but hardly a traditional topic.

"I consider myself a traditionalist with a small ‘t,’" he explained. “I have a big of disagreement with the capital 'T' Traditionalists who are only interested in ‘Traditional' music. I think good music becomes traditional, that it does come out of the air to isolated people, moving them, almost like the wind, you know, the wind that has always inspired people to write and sing. It's that common experience that a song may have with another song that is actually called Traditional.
"I'm not afraid to call 'Coming into Los Angeles' traditional, or something by the Beatles or the Rolling Stones, because some of those songs become classics, like 'Yesterday.' A fellow came up to me after my last concert and said, 'How come you didn't do enough political songs? I thought you were going to come out here and get really angry at everybody. What happened to all those songs?'"

He paused to chuckle. 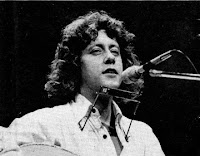 "Well, you know, what social value does 'Old Joe Clark' have? What was its social value at the time it was written? 'Old Joe Clark' was the disco of the 17th, 18th century. There's nothing anti-folk/traditional about doing fun songs.
"Folk music comes from all kinds of places for all kinds of reasons, and some of it is funny and some of it is irrelevant and some, on the other hand, is deeply moving and really relevant.
"You can't get much deep meaning out of the words of 'Old Joe Clark,' but then, you can't dance to 'A Hard Rain's A-gonna Fall,' either. I just try to incorporate what I think is real, incorporate that into the music I perform at a particular time."

Later that night, listening to a long-ago tale about Officer Obie and the eight-by-10 color glossy photos with the circles and arrows, you realize you are, indeed, listening to a traditional song, whether you call it that or not, because you're enjoying it and it's reminding you of things beyond just the song itself. What Arlo said in the morning, he proved on stage at night: That it doesn't matter what-you call a song, or a person. It's the underlying qualities which reveal its identity.

I came across this interview while I was looking for something else, but then this morning, I visited the outstanding folk music blog of a college coffeehouse colleague, Jim Moran, and thought maybe I should go ahead and scan this in. And now that you've read what I have to say, go see what he has to say. Yeah, and he plays better, too.
Posted by Mike at 12:40 PM

But he doesn't write any better than this, and you're too modest about your playing. This is a first-rate interview, and one I'm sure I'll use and allude to in my own postings.