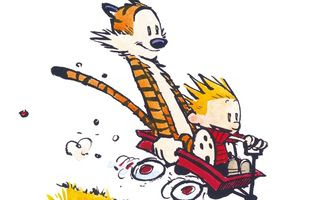 I was a bit coy yesterday about the whole Bill Watterson/Stephan Pastis thing because, at the pre-dawn hour when I was cobbling it together, the story still seemed confined to the insider sites and I didn't want to spoil the surprise for people who had missed the reveal.

About 30 seconds later, it was all over the intertubes and trending on Facebook and there was nothing to spoil.

Well, timing is everything.

But there's still plenty to talk about, because Watterson didn't just step out of the shadows on a lark, and it really isn't much of a surprise to learn that the crossover was actually done in support of Team Cul de Sac, the group of Richard Thompson's friends and fans that has been raising money for Parkinson's research virtually since Thompson was diagnosed. 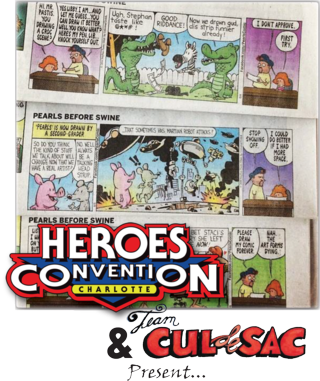 The bottom line is that Watterson, who has been a Cul de Sac fan from the start, provided the strips as material to be auctioned off in support of Team Cul de Sac, where I'm sure they will raise a pretty penny.

You can go see the original strips, as well as some other pretty snazzy auction-bound comic art, at the HeroesCon, June 20-22, in Charlotte, NC. I'll post more about the auction itself when it happens.

As a struggling freelancer, I'm always a little bit surprised at what other people can afford to do, but I daresay the Watterson works will go for something in the range of jaw-dropping. 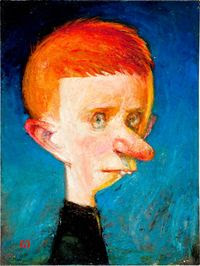 However, in the first Team Cul de Sac auction, there was a very pleasant mix of jaw-dropping and affordable items, so don't assume you won't be able to walk away with something delightful.

This link to my report on that event is worth the click, but the bottom line is that, while Watterson's piece went for over $13,000, the average price of original cartoon art was under $250.

Oh, and the second-highest total was for a piece of art by some fellow named Stephan Pastis.

I got to see some of the original art from that auction in Boston during the 2011 NCS Convention there, because Chris Sparks, who headed up the effort, had the contributions with him at an off-site public event.

At the time, it was kind of going from a well-intentioned dream to something that was by-gawd really happening and the growing excitement was fun to be around. 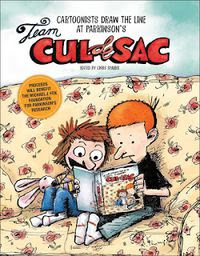 And so was Richard, with whom I had corresponded for some time but whom I had never met in three dimensions. Here's where I go all fanboy about his strip and him and that day and so forth and so on.
The book in which all that art is gathered, together with the artists' thoughts about Cul de Sac and Richard Thompson, remains available and is still a fundraiser for the effort.

And that's their link, not my usual self-serving one, so even more cha-ching goes in the right direction.
So about the kid and the tiger

I don't post a lot of repeats here except when I do a "classics" discursion, which usually means I'm on the road and wanted something I could advance, or times when a contemporary strip reminds me of an earlier piece.

I guess this is more in line with the latter, because the Watterson/Pastis crossover raised an interesting discussion on a third artist's Facebook feed about what other strips stand in the same circle with Calvin & Hobbes.

It was interesting in part because some people didn't get it (which is why I'm not linking to it) and simply named their favorite comic strips. The fact that they missed the point was the point, because what made C&H such a juggernaut was that you didn't necessarily have to get it all.

So, Peanuts, yes. But other clever, well-drawn strips like Pogo made demands of the reader that shut out the pie-in-the-face fans, while pie-in-the-face strips don't attract fans of more heady gag work.

There simply haven't been a lot of strips that can walk the tightrope Watterson and Schulz were able to navigate, which is why their work exploded on the market as it did.

Here's what I mean:

I had this panel over my desk through one of the most grueling, soul-crushing work experiences I ever endured.

Corporate was pressuring our paper to cut everything but the profits. My supportive publisher had taken early retirement and my equally supportive boss had demanded and taken a buy-out because he didn't want to do the required throat-slashing.

During the six months it took me to find another job,the new beancounting management team took away all the fun parts of my actual duties and ground me down with new, low-skill taskwork in an attempt to get me to quit so they wouldn't have to pay me unemployment and could replace me with a part-timer.

Calvin said it all for me, and with a sense of existential dread and futility that is also contained in the other strip: I had to go. Bad.

But there's actually a second panel to the bus stop strip in which Watterson very uncharacteristically steps on his gag with a throwaway punchline I have since forgotten, something along the lines of "I hate Mondays."

You can read and laugh about Calvin being excused to go to the bathroom and heading home instead without recognizing the level at which he can't be in that classroom for one more minute, and you can laugh at the bus stop gag along the lines of "Yeah, going to work is a drag" without being fully dragged down into the world of Sartre, Camus and Beckett. Which makes it different than the last episode of Seinfeld, which fans hated because the writers went over their heads.

You couldn't enjoy and appreciate the wrap up unless, first of all, you recognized that the characters had always been written as unlikeable, self-obsessed assholes, and, second, you caught the Sartre reference and realized that they had died in the plane crash and what followed was the Last Judgement in which they were condemned to the hell of each other's company.

They needed more muffin tops and sponges and other catch-phrases to throw around at the water cooler the next morning.

Calvin provided the gag, not simply to soften the point but to offer almost a second joke.

There were times when Watterson had a point to make that may have whizzed over a lot of heads.

But you don't need a formal grounding in surrealism to get a laugh out of this one.

And Calvin added catch-phrases to the language well before Seinfeld and gang started doing it.

And the interplay between Calvin and his parents, and Calvin and his teachers, was something you could identify with. It was always intelligent humor, but most often was also completely accessible.

Sometimes the insights were deep, but they remained accessible.

And Hobbes was available as a Greek chorus to keep readers aware of the hero's tragic flaws.
Enough. I'm over the TLDNR limit. If you're on Netflix, go watch this movie.

Posted by Mike at 11:01 AM No comments: Links to this post