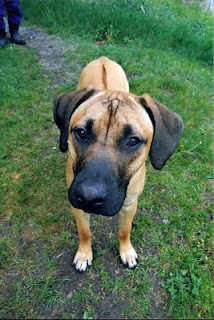 Vaska at 0.667 Years Old
So Vaska has turned eight months old and is closing in on nine. He's training up real well and without a lot of need for specific training sessions: He knows what is expected of him and does his best, with the understanding that he is a hound.

Which means, for instance, that the car is not going to be scratched because, as much as he wants to go for a ride, he will stand on the top step of the porch and look at me while I order him into the car. He'll come in his own good time, or, more likely, after I walk back to the porch and take his collar, at which point he'll placidly walk to the car door and get in.

Or take this morning: We have two main places we go to play, the Dog Park, where it is enclosed and he wrestles and runs with the other dogs, or the Wilder Dam, a wide-open strip of riverside park where there is open park play but also a lot more running-through-the-brush involved.

This morning, we went down to the Dog Park, but there was nobody there, so, after a short stay, we went out to get back in the car and go see what was happening at Wilder. But Vaska did not go from the park gate to the car.

Instead, he ignored my calling and trotted away around a bit of woods and down a short path to check the banks of the White River, where people often take their dogs for a quick dip. Once he saw that nobody was there, he came right to the car and got in. Just checking, Dad.

Here he is with his friends Bogey, a chocolate Lab, and Amos, a small Munsterlander, having some good clean fun on the shores of the Connecticut River, at the Wilder Dam park. By the way, this was taken a few weeks ago, and Vaska is now about two or three inches taller than the other two. We're not sure they've noticed.


Bogey is his best friend, and the two of them are apt to start rassling as soon as they meet, with virtually no greeting. Either that or they will begin a game of keep-away. A few weeks ago, I noticed that Vaska was developing a short of leopard-skin tone under his throat, which I thought at first was simply an unusual color pattern. 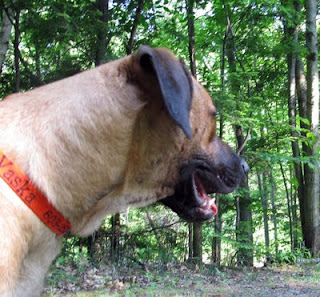 But I also found myself petting him at night and thinking I had found a tick on his neck, only to realize it was a small scab. Turns out Bogey also has these small puncture wounds all over his throat. Now, it is a rule of dog judging that "scars of honor" do not count against a dog who is being shown, but the rules are silent on the topic of "scars of idiocy."


What I like about the rassling matches that Vaska gets into with Bogey and also his good friend Tanner, who is a pit bull mix of some sort, is that they readily switch positions during the game. The three share an endearing generosity of spirit and have no need to be "top dog." They have a wonderful time just beating the living bejabbers out of each other and we don't have to intervene. In fact, you'll hear in the background of this vicious dogfight a discussion of yard sales. The kids are playing, the moms are talking, life is good.

And Vaska is still a puppy in many ways. Here he is running towards me, and you can see that he still has the rocking-horse gait of a puppy, and a tendency to "pounce" that is also the mark of a puppy.


But our little boy is growing up. He has started taking an interest in checking the p-mail on lampposts and trees as we walk, though he's a few weeks away from thinking to add his own comments. More to the point, the other day we arrived at the Dog Park to find Buster there, a pit/lab mix who is something of a bully. Buster was in the process of picking on some of the other dogs, playing way too rough, like the sort of obnoxious jock who throws elbows in a game of playground hoops.

He grabbed Vaska by the back of his neck and threw him down, which is fair play, but then held him and wouldn't let him up. A few weeks ago, the puppy would have squealed for help, but Vaska got himself free and then made it quite clear that he didn't expect, under any circumstances, for any reason, to be treated like that again. It was a little scary, but it was simply a quick moment of strong assertion. The message was delivered without physical contact and then, the moment having passed, the group went on to play, with Buster behaving himself.

After Buster and his owner had left, other owners were pleased, chuckling about it, calling him the "Dog Park Police" and telling me they appreciated him doing what the other dogs weren't able to. And that may be where it stays: He's such a good-spirited, friendly, outgoing fellow that he may simply grow to be the big guy with a sense of propriety and self-control.

I hope that's the case, and my experience with ridgebacks suggests that there's a good chance it will work out that way. But the next six to eight months will be an interesting time, because my preference is to let Vaska remain intact until he is about 14 to 16 months old, for reasons mostly having to do with skeletal development. However, if he begins to show signs of throwing his weight around in an unacceptable manner, the snip will come sooner.

In any case, my little boy is about to enter puberty, and the process with dogs is not terribly different than with kids. There will be some testing and a little rebellion. And it has already become a source of amusement: Vaska is very vocal when he plays, and, lately, he has begun to bark like a deep-throated, frightening timber wolf, but there are still times when his adolescent voice breaks into a shrill puppy yip and everyone falls over laughing.

Bottom line: This is one hell of a good dog and we're having a lot of fun together. 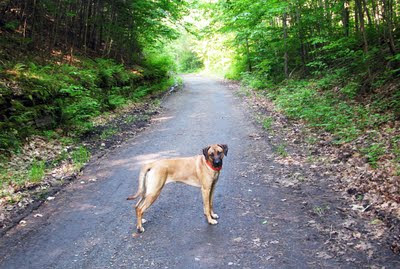