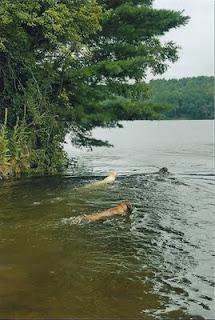 Aquadog at 10 months
I've had ridgebacks for 25 years, and, in that time, I've known some who hated water and some who would go into the water up to their bellies and no further.

But Vaska has somehow become a swimmer, goaded on by his best friend, Bogey, and his other buddies, all of whom have no problem at all racing into the river after a stick. For a time, Vaska would act like a proper ridgeback, walking out until his feet threatened to leave the ground, and watching until the others came back within reach, then joining in the wrassling match as they came back onto dry land.

Life is too exciting, however, for such limitations. At the top, he joins in the race for the stick in the Connecticut River, along with Bogey, the chocolate lab in the lead, and Star, the yellow lab in second place. They're built for swimming and he's not, but he refuses to be left behind. 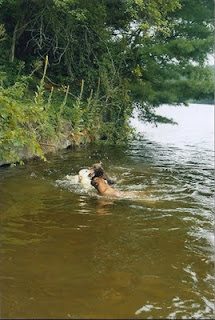 And here you see that he's certainly willing to join in the tussle over who would bring the stick ashore, and he doesn't wait until everyone is touching bottom to enter the fray.

But, while it took the excitement of a stick chase to get him in at first, he's now perfectly comfortable in the water under far more relaxed circumstances, as seen in this scene shot in the White River, with Guinness and Guinness's little blonde-haired mistress.

All this playfulness and non-ridgeback-style comfort with water, however, hasn't undermined the courageous lion-hunter's natural instinct for confronting danger.

I should have named him "Leiningen."