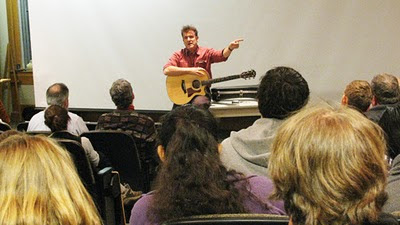 Lecture with music, or vice versa
One of the benefits of living in a small community with an Ivy League college is that, if you keep your ear to the ground, you can stumble across some pretty interesting events.

South African musician and activist Johnny Clegg came to Dartmouth this week, delivering some classroom lectures on Wednesday and then delivering a kickass concert Thursday night. It wasn't terribly well promoted, but I spotted some posters while I was walking Vaska and I managed to make both his public lecture at the end of the day Wednesday and his concert. That picture is from the lecture part, and most Johnny Clegg fans wouldn't recognize it, since he's generally more colorful, but they would recognize it in that his concerts are a sort of confessional in which he talks about himself and his life and his country's culture and then slams you with some fantastic music and spectacle.

The lecture was more restrained than that.

I've been a fan since sometime in the late 80s when he came to Montreal and, in addition to giving a concert, appeared on local TV. I didn't make the concert -- probably a combination of a job that was often more than 9-to-5 and being a single dad. But I was blown away by his interview and one song on the TV show and went out and got a couple of his CDs.

Clegg was born in England but lived in Zimbabwe (his mother was Rhodesian) as well as Zambia and Israel before settling in South Africa, where, at 15, he saw a man on the street playing Zulu guitar, an instrument that uses different string placements and tunings to convert a European instrument for African music. The player was a maintenance man, but in his off hours, he gave the young white boy lessons on the instrument, and Clegg began to hang around the hostels where the migrant workers lived.

These, he recounts, were large residences, where a couple of thousand workers might live, and, because "home districts" are critical to Zulu identity, it was not uncommon for entire floors of hostels, or even whole hostels themselves, to be taken over by men from the same or allied districts. They worked during the week, but, on weekends, you could find them selling various native things or vending traditional food and beer, while dance teams practiced or competed against each other in the streets.

"When I first saw the war dances, I was smitten," Clegg said. "I'd done karate, which comes from centuries of Japanese tradition, and when I saw the war dances, I saw some of the same thing." The way the Zulu men moved in the dance not only reflected their daily lives and culture, but "carried certain messages about masculinity, certain messages, values and concepts." He applied himself to learning those as well as the music, and became accepted as, he admits, "something of a mascot" to one of the dance teams.

In the mid-1960s, hanging around the hostels was a little dubious, but what was plainly illegal was when he visited his Zulu friends in their districts. But the dance team was headed up country, to visit a district with a powerful chief who had 35 wives and 160 kids, and the now-16-year-old Clegg went with them.

"I had certain romantic ideas of Zulus from seeing them living in the city," he says, but seeing them at home changed his perspective. "It was a wild place for me," he says, and the difference in seeing them there rather than in the urban environment was that he now saw how they incorporated a world of animals -- both the animals they hunted and the cattle they raised -- into basic aspects of their culture, especially in the ways the men expressed their identity in dance and in stick-fighting, a form of martial arts that defined their place in a very strongly structured pecking order and that informed the form of their dancing.

And on the third day, he was arrested by the security forces for being in an area forbidden to whites. He was threatened with deportation and his friends were charged with bringing him into a tribal area, and were only spared by a technicality -- the signs barring whites from the area without permits had not been erected.

But he continued to sneak into the tribal area to be with his friends and to learn more about their language, lives and culture, and at this point in his lecture, Clegg went into a discursion on cattle and, specifically, bulls.

A Zulu man is inextricably linked to the bull of his herd, he explained, and there are certain rites that must be observed, including that the man must rise in the morning before the bull and must take his morning piss before the bull takes his. It is a matter of pecking order. The bull is his "little brother" and must keep his place, but, of course, for that to happen, it's more a matter of the man asserting his status than expecting the bull to defer.

If the bull is sick, the man is sick, and, if the bull seems likely to die, it is critical that the man slaughter and replace it before that happens. For the bull to simply die would be a disaster for the man.

When two men have a serious rivalry, it was common to settle it by having their bulls fight, and Clegg managed to get video of one of these events, which are becoming rare. The two men shouted encouragement and "praise words" to their bulls, and supplied trash talk while the bulls, excited by the attention and atmosphere, began to paw the ground and go at each other. (I would point out that, at least in this particular instance, they didn't seem to inflict much damage, but rather did some pushing, shoving and clashing until one yielded, to the immense delight of its owner's human rival.)

Clegg noted that a bull has one horn with which he deflects blows and that he initiates his attack with the other horn. Similarly, in stick-fighting, the boy has a small shield -- very much smaller than a goalie's blocking pad -- on one hand and a stick with which to attack in the other. You could not only see the similarity to the bull's attack and defense in the video, but (and Clegg did not mention this) it was also apparent how this system of stick-fighting would translate very directly into use of the cowhide shield and the short spear, the assegai. I was also struck by the fact that Shaka, who invented the shorter form of the assegai around the turn of the 19th century, also devised an attack strategy that involved a double-flanking move and that was known as the "buffalo horns" formation.

Clegg's interest being musical, he noted that the bond between man and bull is such that there are "bull poems" recited that record the bull's history -- where it was bought, how it fought, etc. And the dance team is referred to as "oxen" when they do a group dance, and they are "plowing the dance" with a dance leader who carries a stick.

A man who seeks the "ugly heart" of the bull can become the type who constantly starts fights, but that "ugly heart" is also part of the paradox of masculinity, Clegg said: A man must work well with others, as one of the neutered oxen, but he must also be prepared to take life when that moment comes, as the fertile and intact bull.

"There's a lot of pecking order in their culture," Clegg said, "and, when a man walks into a room, it can be very funny seeing how he gets sorted out into his place."

I was fascinated by his lecture because I had never contemplated the nature of a warrior culture that raises cattle. Many of our own native people have a deep, rich warrior culture, but they don't have a strong identification with animal husbandry. After the coming of the whites, they did have horses, but only the Nez Perce are strongly associated with purposeful breeding of stock, and, while the coming of horses transformed many native cultures, this basic identity that Clegg spoke of simply doesn't exist within those cultures: American Indians have a strong identification with the animals they hunted, but that's an entirely different relationship.

The buffalo dance is simply not the same as the bull-influenced dances of the Zulu because no Lakota or Blackfoot ever felt compelled to drag himself out of bed in the morning so he could be sure to piss before the buffalo had pissed. It's a different relationship because the relationship with the buffalo is impersonal -- it is not "that" buffalo, but buffalo in general. The Zulu knows the specific bull with which he is linked the way he knows his wife or his child and he has a daily, working relationship with that bull.

So I walked around pondering all that new information for a day, and then went to Johnny's concert and got to see some of what he had spoken about. He had two young men who danced, and I have to say that, while everyone cheered and whistled, I sat there and thought to myself that I was seeing only a very small moment of something that, if I wanted to know what I was looking at, I should have started thinking about it when I was 15, and I should have been living in Johannesburg and I should have been willing to go over to the hostel to take guitar lessons, and to listen, and to learn.

Or I could have done it the simple way and be born into the Zulu culture. But I don't think there's another road to follow. And I think only Johnny Clegg can be Johnny Clegg.

Here he is in action. "Asimbonanga" translates as "we have not seen him" and refers to Mandela, as do the lyrics about looking across the water, since Mandela was being held in an island prison.

Of course, things have changed since the days when Johnny Clegg's integrated band couldn't be promoted (but sold thousands of albums anyway). Now, it looks more like this:

Oh, I do love Johnny Clegg. A friend turned me on to him in 1990. Somewhere I have a photo of my son, Jordan at about five, dressed in all his "cool" clothes, his little soft-sided bag packed, on his way - he said - to Africa because he loved the song, Scatterlings of Africa so very much. We both did.

Did not know he was going to be at Dartmouth. You obviously know how to live right. Thanks for posting.

Thank you for this! I fell in love with Clegg in the late 80s. We played "Scatterlings" until the tape wore through. I knew a good bit about his history but this synopsis of his lecture adds so much more colour to the culture he was immersed in. Good call to catch both the lecture and the concert.