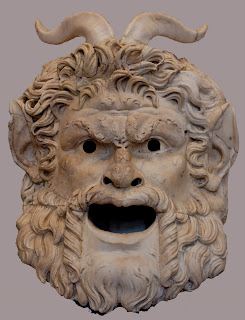 Larry the Animal
I doubt that Larry the Animal thought twice when he saw the lineup of motorcycles outside the Bonnie Doon, sporting colors. After all, the Undertakers were his friends. They did business together. And he really wanted a milkshake, so he walked on in.

I can't remember when I first met Larry the Animal, but I suppose it was my sophomore year in college. Larry was one of those high school kids who hang around campus because he's too smart for his contemporaries, but he's not quite socially poised enough to realize that he doesn't really fit in with the college kids, either. Larry was bright and funny and harmless enough, and so we took him in and let him hang around like a stray puppy.

And he really was a stray. Larry had been tossed out of his own home, probably for being too stiff-necked to cut his hair and behave the way his parents wanted. And I'm sure -- very sure -- that he mouthed off to his parents. There was no filter between Larry's brain and Larry's mouth and it was a time when there was plenty of positive reinforcement around for shooting off your mouth in defense of freedom. So Larry lived with Laurie, another high school kid. They weren't boyfriend and girlfriend, simply a pair of bright kids, but apparently Laurie's parents were more tolerant than Larry's.

They'd have to be, because Larry would try anyone's tolerance. He was obnoxious. But, at that time, there was a strong tendency towards tolerating people, and so Larry was welcome. After all, in addition to being obnoxious, he was funny and smart and good-natured. I'm sure I got a few passes on the same basis.

I'm not sure how Larry got by in the world, but it appeared to be a combination of Laurie's parents providing room and board and Larry doing some hustling and a fair amount of dealing.

Larry got his nickname, "Larry the Animal," because he could be clean-shaven one day and heavily bearded the next. You could sit and watch his beard grow. To give you a visual, imagine if Benny Hill, rather than Robbie Coltrane, had been chosen to play Hagrid in the Harry Potter movies. Like Benny, Harry wore wire-rimmed specs and had a constant expression of cheerful expectation. Like Hagrid, he was covered with hair.

In fact, Larry the Animal was so hairy and jolly-looking that he was, very briefly, employed as Santa Claus at the department store downtown. Anyone who has done this job knows about the wiseass teenagers who try to goof on ol' Santa, but they got a shock when they'd sit on Santa-the-Animal's lap and ask him for a nickel bag of Panama Red.

"Ho-ho-ho," Santa would say. "I don't know about that, but maybe Santa could hook you up with some Michoacan that the elves just scored, or how about some blonde Lebanese hash?"

However, the career of Larry the Santa Claus ended abruptly when a pair of South Bend police were headed up on an escalator on which he was headed down, and wished him a merry Christmas, to which Santa responded by suggesting an anatomical impossibility, adding a porcine epithet.

Larry didn't consider this in the least a setback. The job hadn't been that much fun, and he really didn't like the police. The fact that the Santa gig had been providing him with pocket money was, well, not a priority.

Larry had good reason to dislike the police. As a kid with long hair, he was hassled on a regular basis. And, as a kid who couldn't keep his big mouth shut, he was hassled more often than other long-haired kids. South Bend wasn't so big a city that anyone who bothered to stand out was lost in the mix.

The South Bend cops were not so good at undercover work -- they tended to the oxfords-and-white-socks fashions. But even a blind pig finds some acorns, and Larry the Animal was eventually busted for possession.

We all heard that Larry had been busted, but there was often a gap between the bust and the result of the bust. Still, it seemed like Larry was out on the street a long time after we'd all heard he had been busted.

And then a pattern seemed to emerge.

Larry the Animal might have stayed out of the clink, but his clients did not.

Had the South Bend police been more polished in their approach, the link might have gone undetected a little longer, but the connection between dealing with Larry and getting busted became pretty clear in a short period of time.

For example, someone bought grass from Larry and, by the time he got home, found police cars in his driveway. It did not take long for people to begin to connect the dots.

But Larry the Animal went on his merry way, believing that his accomodating manner had saved him from a jail sentence and would also go unnoticed in the world.

So when he dropped acid one day and, somehow in the course of his trip decided that a milkshake would be a very nice aesthetically-enhanced experience, he had no hesitation to head down to the Bonnie Doon.

Now, not everyone who trips on acid wants a food experience, but any experience you have on LSD will be greatly enhanced.

Including walking into a roomful of motorcycle bandits who know why you aren't in jail.
Posted by Mike at 5:52 PM

When i started reading, i thought, "This is surely going to be another 2-part story." But...nope. I think the ending is pretty clear, right here in one installment!

Yikes! Great ending. Neat how you wrapped that scene around the whole story.

I agree with Ronnie - it is, indeed, good reading. Your memory for detail is enviable. What I want to know, though, did Larry walk out of the Bonnie Doon?

I think the question is more like, did Larry walk again after the Bonnie Doon?