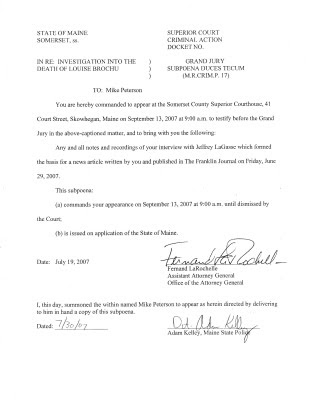 Among my souvenirs
(Click for a larger version)
David Gustafson, my former publisher, remarked on Facebook last night that he once forced me to go interview a possible murderer. I'll give him this: I didn't think I'd get anything but grief, driving up to the guy's place and asking him a bunch of questions. As it was, I got a very good story, as well as one helluva souvenir.

As I have often told students, it's important to ask the questions, even if they are rude or seem pointless, because you never know when someone is going to screw up and answer one.

In this case, a woman had been murdered at the flooring mill which she owned and where she also lived. A rival paper wrote that the police were looking at a former employee as a possible suspect. They identified him, and David suggested I drive up there and try to talk to him.

(I should note here that he said he didn't think I'd have any trouble, but then told me to call when I arrived and again as soon as I left. And to be careful. It's good to be publisher.)

The fellow was living over an out-of-business diner on a country road not far from the flooring mill. I parked and walked around the place, trying to sort out the various diner entrances from the upstairs apartment entrance. I found a likely door and knocked, and heard a window open upstairs. I expected "Get the hell out of here," but the young fellow came on down, we talked for a few minutes and he invited me in.

We sat at the kitchen table and talked for well over an hour, while his girlfriend tried to keep the pets and kids out of our hair. He laid out his life and his side of the story, protesting his innocence but not sugar-coating a past that included a couple of stretches for burglary, arson and domestic violence. He said he had cooperated with the police up to a point, but now felt he had to stop talking to them and get a lawyer. (Yes, it occurred to me that, if he intended to stop talking, right now would be a good time to start, but I didn't suggest it to him.)

This is where the part about the subpoena begins. For the nearly three weeks since the murder, I had been trying to get the police to say whether it appeared to be a robbery or a sex crime. This wasn't a matter of prurient interest. It was a matter of letting the people in this very small town know whether they had Jack the Ripper running around or someone who had needed money. In terms of their personal safety and security, that's a very large difference.

But the police wouldn't budge. The lead investigator said that people should lock their doors no matter whether they lived in the big city or out in the country. One resident of New Portland laughed at that and said to me that, if he locked his door, he wouldn't be able to get back in because he hadn't seen his house keys in years and didn't know where they were. But people who hadn't kept track of their keys were digging out their guns and it was becoming a potentially uncool situation. I recognized the importance of not compromising the investigation, but it was, I felt, in the public interest to let people know the basic nature of the crime.

Looking at the search warrant provided some insight into the matter, and I wrote up the interview, including the observation that the items on the search warrant strongly suggested that Louise Brochu had been murdered as part of a robbery. The police declined to comment for the story, despite my assurance that I wasn't trying to reveal important information and would respect the integrity of the investigation as long as I could tell readers what was going on.

And to make my point, I said there were all sorts of rumors flying around, some ridiculous, some credible, including ... and here I mentioned a few things I had heard and wasn't going to publish, but that indicated both the level of speculation going on and the futility of keeping everything under wraps. I suggested, once more, that it would be better for them to reveal a small amount of non-critical information to reassure residents and to keep the rumor mill within bounds. No dice.

A month after the story ran, I was visited by a detective. We spoke for a time, I declined to reveal anything not in the story and, in response to a request, told him I didn't know where my notes were and that there was a good chance I had already thrown them out. And that, in any case and with all due respect, it is a point of First Amendment ethics that reporters do not testify about unpublished information they have gathered in the course of researching a story.

And so he presented me with the above subpoena. And reminded me that the state of Maine does not recognize the aforementioned ethical point. With all due respect.

This sort of story only has teeth if you end up going to jail to protect your integrity, but, alas for the storyteller in me, it didn't come to that. There were some more discussions between me and the lead investigator, in the course of which I realized what they were hoping Jeffrey LaGasse had said to me. It was one of those rumors I had listed in my conversation about things I had heard but wasn't going to publish, a specific detail that I knew they would not like to see in print having to do with the disposition of the body. I hadn't gotten it from LaGasse, however, but from someone in town.

Now, a purist would have refused to offer any information, but I'm not a purist, I'm a pragmatist. I did not tell the investigator where I had heard it, but I did tell him I didn't get it from LaGasse. Which probably robbed me of my chance to be a First Amendment martyr, but since martyrdom wasn't the point of the exercise, I'm not too bent out of shape over it.

I did not intend to testify except to confirm the accuracy of what I had written, and I was not sure how far my employer was willing to back me up, since David had left and our ownership had changed since the subpoena was issued.

But I knew I could find someone to feed the dogs, and that pretty much covered my bases.

Then, the day before the grand jury was to convene, I called to confirm that I was still on the agenda and was told my presence was no longer required. It was an interesting combination of relief and disappointment.

A few weeks later, Louise Brochu's family held a news conference to announce a reward for information about the murder. In the course of things, the lead investigator and I were standing at one side and he said he knew I was just doing my job. Then he asked, "So, what did you think of him?"

I replied that I've known a number of cons in my life. Some of them are very scary people, others you would invite to your kid's birthday party. Jeffrey LaGasse was a friendly, personable young man. That had nothing to do with his guilt or innocence.

And some months after, I ran into a trooper at something else entirely, and took him aside. "By the way," I said, "are you aware that our friend Jeffrey LaGasse has moved out of that apartment and is living in Kingfield?"

He chuckled and said, "Oh, we're keeping a close eye on Mr. LaGasse."

And apparently they were.

Without my testimony, you will note. But I got to keep the subpoena. 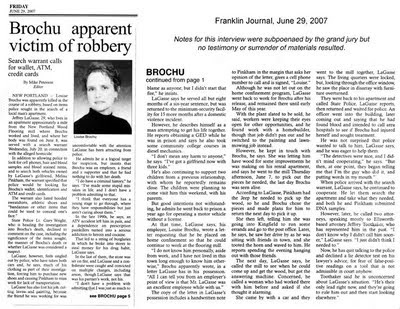 The only time I've ever been subpoenaed was to testify in a robbery case against a couple of youngsters. The cops had caught them in a field after they had apparently ditched their getaway car. The kids claimed that they were just trying to find a place to look at a comet; I was subpoenaed to testify about whether or not they could have done so from that place at that time.

That case never came to trial, but it looks like yours certainly will. I hope you tell us about its resolution.

Interesting, sad case, though i guess they all are. The story is a good presentation of established facts and the interviewee's claims and a good sorting-out of the difference. Despite all the crime shows i watch, the detail and specifics of items in the search warrant is pretty amazing. I'd be interested in the verdict too.

I'll be able to comment more on those details in the search warrant once the trial is over. Among the things they wanted was a combination that painted at least one credible scenario, but we'll let the wheels turn without input from the Peanut Gallery. If the state wanted to present a hasty, half-baked case, they could have done that a year ago. I suspect they have their ducks in a row. And I still miss Maine, but, boy, do I wish I were there for this!

You were certainly the right person to send to get that interview. Very nice job.

Sorry, I've been too busy lately to do any commenting but I have been reading. This is a truly interesting tale. I'm a lifelong true crime junkie (alas) and I'll be sure to follow this trial closely.