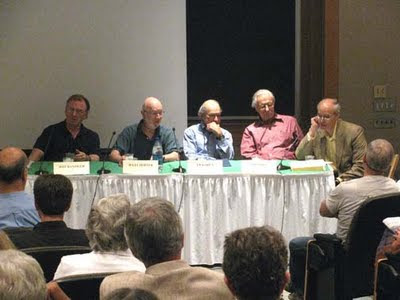 A giggle of cartoonists
(Click on images for larger versions)
Yesterday, Dartmouth College gathered, in Jules Feiffer's terminology, not a "gaggle" but a "giggle" of cartoonists for a presentation on political cartooning. Feiffer has been an artist-in-residence at the college this summer; sitting on yesterday's panel above were, from left, Jeff Danziger, Feiffer, Edward Koren and Edward Sorel, with moderator Richard Stamelman.

I didn't count heads, but the mid-sized auditorium was filled and people were standing in the back. Most of those uncounted heads were covered with white hair, which may have been because the college is out of session but I suspect was in large part because of the heavy New Yorker and Village Voice influence on the panel.

A 90-minute presentation with that much talent present was necessarily pretty packed, but they had a good format: Each cartoonist had 10 minutes for a slideshow plus commentary, and then they just took questions and talked. 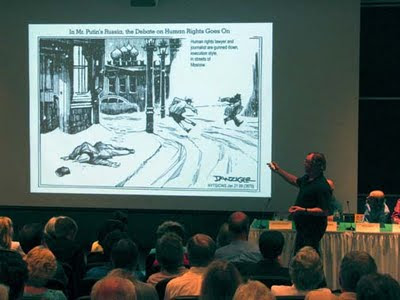 Danziger led off, and had several observations both about cartooning specifically and as a trade. For instance, for this chilling cartoon showing the murders of a human rights worker and a journalist in Russia, he noted that, with no witnesses, he had the freedom to imagine and portray the scene in a manner that made his statement. "Nobody knows what happened, so you, as a cartoonist, can make it up as you please." 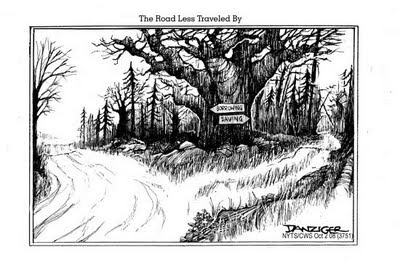 But he also groused, albeit in a humorous way, about the problems of getting creative images past culturally illiterate editors. "The issue with using 'The Road Less Traveled' is that you have a problem with the number of editors who haven't read any poetry." 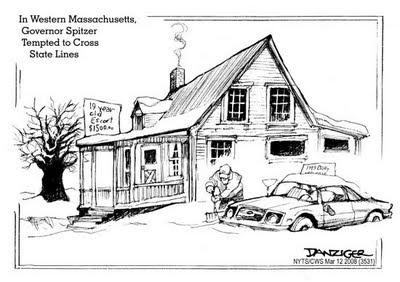 Age came up more than once in the discussion, as you will see, but Danziger got a large laugh when he pointed out the limitations of creating cartoons that have meaning for 29-year-old editors. I guess that, in the Q&A, I should have asked him about the related issue of reaching 29-year-old readers, but the over-50 audience broke up when he showed this Eliot Spitzer cartoon, and a second time when he confessed that he had to explain to an editor in Boston that an "Escort" was a type of automobile. (And, let us note, a type of automobile that was produced by Ford until six years ago. Not exactly a Hupmobile.) 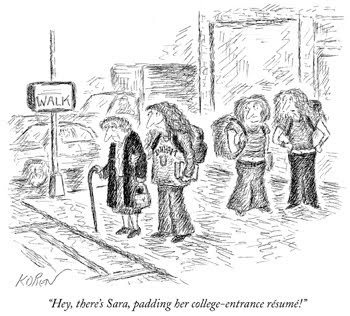 Speaking of getting laughs, I was surprised at how many outright laughs Edward Koren's cartoons got. I don't think of New Yorker cartoons as provoking laughter so much as thoughtful amusement, but he had the audience broken up with a good two-thirds of his panels, with the other third getting the knowing chuckles I would have expected overall. 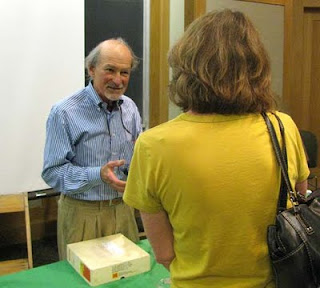 Koren himself was very warm, with a twinkle in his eye but a barb on his tongue. This came up in a cartoon I didn't find on-line, though it is here in his Cartoonbank listings. It is set in a kitchen, in which an older couple say to a middle-aged fellow, "Your mother and I think it's time you got a place of your own. We'd like a little time alone before we die."

It also came up in the Q&A, when someone asked what particular element they all shared, to which he quickly answered, "A hatred for humanity."

That shared trait came up again after the panel, when I was talking to Danziger about editors who think editorial cartoons should be "funny." He spoke of a prominent cartoonist (unnamed, since he didn't know I was blogging this) who has a very sunny disposition, and he told of confronting him: "Isn't there anybody you hate?", answering himself back in a John-Denver voice, "Nope! I like everybody!" and then dismissing the fellow and his admittedly humorous work with a snort.

The entire panel also expressed jealousy of Danziger for having been named by Bernard Goldberg as one of the "100 People Who Are Screwing Up America," and Feiffer added, "Paul Conrad at the LA Times made Nixon's enemies list. We had been friends up to that time." Feiffer also observed that he had really gone after LBJ during the war, and there was a period "when I had just pounded him and pounded him. One of my cartoons about him was particularly vicious, and then I got a call from the Johnson Library asking if they could have the original. Boy, they really know how to get to you!" 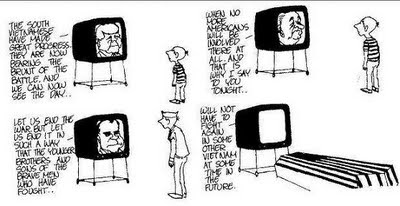 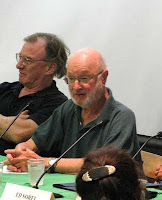 Later, the humor disappeared briefly as Edward Sorel cited one of Feiffer's Vietnam era cartoons as a favorite. It wasn't available at the time -- Feiffer did describe it in detail -- but I found it and that's it above. (Note, incidentally, the artistic motif of stripes, which Feiffer cited in his description.)

Feiffer, as you might expect from a fellow who is also a playwright, was the most like a stand-up comic, in terms of cracking actual jokes rather than wry observations. Unfortunately, he explained, he was so busy with his teaching duties that he forgot that the panel was supposed to be on political cartoons and simply brought a selection of his work. 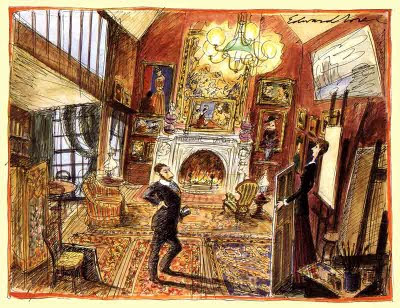 Sorel, meanwhile, presented in large part as the accomplished ink-and-watercolors artist he is, though he does not shy away from political commentary. But he cited this illustration of an imagined meeting between Edgar Degas and Mary Cassatt as his favorite work of all times. "I will never do a drawing that good again," he said soberly.

For most of his 10 minutes, though, he showed his Time and New Yorker covers, in which his talents as a caricaturist as well as a commentator were on display. Later, in the Q&A, he decried the lack of artistic development he sees in younger cartoonists. He suggested that penicillin was likely to blame: "Nowadays, penicillin can cure pneumonia in a few days. When I got pneumonia, I was sick for a year, and by the end of that year, I was an artist!" 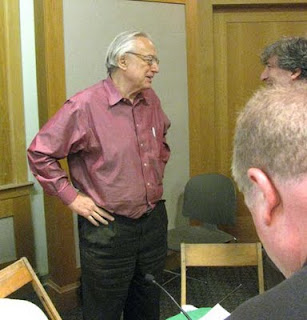 The panel as a whole, however, was gentler on the topic, citing the artistry on display in graphic novels as a high point in current cartooning, and mentioning with approval the nearby Center for Cartoon Studies. ("It's far more impressive than any other cartooning school I've ever visited," Koren deadpanned.)


And Sorel himself softened a bit on the topic of the future of cartooning. "It's a mistake to ask four elderly gentlemen what new thing is coming along," he said. "How the hell would we know? There will be other things that come along and nobody will know what they are until after we're dead."

He gave the example of theater, which "died" years ago, and then along came Beckett and other playwrights to re-invent the form. Cartoonists yet unseen "will re-invent cartooning in their own way and will be able to find ways to make it pay."
Posted by Mike at 7:25 AM

Some of the Gods, all in one room (most of them, even). You lucky guy.

some of the more well known, and well payed in one room , we are all our own Gods,( just a few of us, even ) and yes a Lucky guy, well written and informative... tanks

The stripes theme in the Feiffer cartoon is just the kind of thing that whooshes right over my head - until somebody points it out and lets me appreciate a terrific drawing even more.