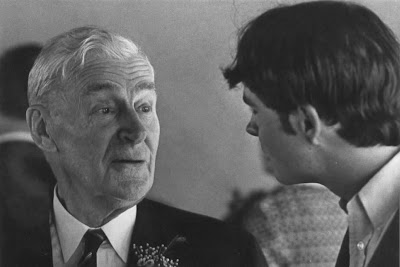 My Grandfather Speaks (again)
About a year and a half ago, I posted a letter my grandfather had written to his grandchildren. Here's another of his letters I just came across that has not lost
its relevance since 1969.
It's no secret that I was a dropout at the age of 15. At the time I believed that I was doomed to live out my days as a nonentity in the town of Ironwood, as did all of my classmates of the primary grades.

Some, or most of them, were perfectly content to do so. The possibility that I could improve my lot was dinned into my ears during the ensuing two or three years by two men – John V. Brennan, the sup't of schools, and Rolland Mothersill the science teacher, who used to talk to me periodically after working hours. They were wonderful men.

I finally came to believe that I could improve my outlook if by some means I could get into college. In a short time this became an obsession with me – I had to have a sheepskin! During this time I had no dreams of great fame or wealth, merely an improvement be it small or great. However, once I had started on this tack there could be no turning back, and this was important.

Eventually, I received the diploma, and a whole new world was opened for me. In the ensuing years I learned many things that have served me well, and I want to discuss some of them here. You may argue that my ideas are passé; that I'm not attuned to the modern problems of your age group.

Perhaps, but everything wasn't smooth sailing for us either. While we didn't have sit-ins, mass protests and race riots, neither did we have the time for them. When we weren't actually doing our school work, most of us were trying to aid our finances by doing odd jobs or sometimes regular work. There were no welfare payments or government scholarships and few of our parents could provide more than minimal help. Neither was there any TV enabling the show-offs to get cheap publicity.

Perhaps the most important guideline was that one must never quit because the going becomes too tough. Never! Never! Never! For other reasons possibly, but not because you can't take it. This becomes more important as you rise to bigger responsibilities, since the Home Office immediately loses interest in a man who even talks of being discouraged.

Then, too, I learned that some of my best efforts would go unrecognized, or apparently so. I recall as a third grader reading in The American Word Book that "Virtue is its own reward." I couldn't grasp its meaning then but I do now – and it's so very true. When a man can get pleasure out of doing a good job, whether the world recognizes it or not, he has arrived. He will then do it even though he expects to be ignored.

Don't look for cash on the barrelhead in payment for every good deed. Deferred payments often bear high interest rates. Belated recognition is much sweeter and more effective than that given instantly. I often think that there could have been a 10th Beatitude saying "Blessed be they who expect nothing, for they shall not be disappointed." At first glance it seems flippant, but think it over.

Similarly, I have learned that modesty as to your accomplishments pays off in the end. While you may miss recognition for some of your better efforts, you may well be given credit where you don't really deserve it, and in this case your protests merely serve to strengthen the idea. I have been in gatherings of "big shots" where one after another claimed credit for an idea or an accomplishment, and none of them were very convincing. The very fact that they considered it necessary to talk about it merely served to highlight their own doubts as to whether they were getting the idea across.

I know a superintendent of a mine who made it a point to disclaim authorship for any new or novel way of doing the various underground jobs. It usually got to the point where the visitor he was escorting through the mine decided that he was actually lying and that he was involved in most of them. I've used this system on occasion, too. In a word, it pays to forget about "I" and use "We" or "They."

To proceed: I've learned that when I'm faced with a distasteful job, I must do it wholeheartedly. For example, during the 30's when there was no federal or state aid for the unemployed it became necessary for local citizens to raise money and to administer it among the needy. Being primarily engineer-oriented I detested such work, but as manager of the only industry in Cornwall I could not pass this responsibility to others. They unanimously agreed that I was "it."

After approaching the problem without enthusiasm for a while, I realized that it wouldn't go away and that I had better tie into it. In a little while I found that I was doing a better job and that I enjoyed it. When one considers that I was in the forefront on the fundraising for all of Lebanon County, and the sole disbursing agent of funds throughout the year at Cornwall, this was no small task, but it's no secret that the job was well done. Incidentally, during the fifteen years (more or less) that I was in this activity, I never received any money either for work done or for traveling or other expenses, and furthermore although I never mentioned this fact everyone knew it.

Along the way I have been faced with some "No-Nos," such as – Do not rely on favoritism to advance you in your career. The only "pull" that has any value is that which you have created by your own efforts. If you depend on the favor of someone in the hierarchy of your organization, your future is only as secure as his. Should he drop out of the act, you most certainly will end up in the doghouse or out in the cold. Furthermore, you will be thinking of this constantly and will worry about the possibility. I've seen it happen more than once, and to people in high places.

I recall an incident that occurred while I was winning the war in South Carolina in early 1918. A brother shavetail suggested one day that I become a Mason. In answer to my query of why, he said, "When you get out of this army you will undoubtedly go to work on some job where it will be necessary to call on important people, either to sell something or to get them to agree to some proposal, and when you can reach up to your lapel and expose a Masonic pin the man across the desk will be more likely to cooperate."

Here's another gripe of mine: -- Never admit to anyone, especially yourself, that 'you did the best you could.' In the first place it probably isn't true, and secondly you are saying that your best is not good enough, you are admitting defeat. Many people feel that such a remark justifies them before the world. I claim that it merely proclaims incompetence.

Before ending this exercise I'd like to go on record with one more admonition: -- Avoid selfishness like you would avoid poison. You have all heard that the love of money is the root of all evil. I would substitute the word "selfishness" for "love of money." You haven't seen it in your home, thank heaven, but you will see it as you go out into the world. I could base my reasoning in this matter on religious teachings, but I maintain that it just doesn't pay.

Finally, and this word may have been too long in coming, I'd like to give you my idea of what makes a successful man. If he excels in his chosen field, whatever that may be, while leading a life marked by honesty, integrity, and the respect of his fellow man, he is a success. I can give you no better examples than your father and mother, which brings us back to from whence we started.

Sincerely,
Grandpa
***************
Arthur F. Peterson (1893-1978) was the son of Danish immigrants on the Upper Peninsula of Michigan. After dropping out of school to help support his family by working in the mines, he was persuaded to return and earned a scholarship to study metallurgical engineering at the University of Wisconsin. I have often described his career as one that began by his carrying a lunchpail down into the mines and ended by his carrying a briefcase up into the executive towers. The picture was taken at my wedding in 1971.
Posted by Mike at 6:35 PM

Mike, you couldn't have posted this at a better time. I have been handed a task at work for which I have little aptitude and even less enthusiasm. I have been procrastinating and fretting over it for two days. Your Grandfather's letter reminds me that most importantly, it isn't going to go away; and secondly, that if I tackle it enthusiastically, it will a) get done and eventually be in my rear-view mirror and b) I may even convince myself that every moment of it doesn't completely suck. I'll also fool my supervisors into thinking that I can do this type of thing well, too.

But mostly it reminds me to suck it the &%$@ up, in far, far more elegant prose. Something we all need to be reminded of now and then.

I must add that during one family gathering, Grandpa looked around at the happy group of his many descendants and said to me, "There isn't a selfish one among them!" I couldn't have been more pleased.

What an extraordinary man, and what a gift he left his family. I think about how wisdom like that echoes through a family down the generations to influence people a century later who never knew him--and now, using a medium the old man couldn't have anticipated, you share it with the world.

Maybe the "old man" couldn't have anticipated this particular electronic medium, Brian -- but I'm sure he would have recognized this artform and its slightly warped version of part of his message.

I think I would have liked your grandfather, Mike. But, if I had known him, I might not always have liked his advice.

Actually, Grandpa's advice was so well-couched in real-life experience that it was quite palatable -- he'd look at your situation and suggest ways to make things work out. On the other hand, one of my father's favorite sayings was "If you don't want to know the answer, don't ask the rabbi." That also came from real-life experience, I'm sure.

You posted this at a great time for me. Thanks much. I needed a reminder.

On another note, your Grandfather's writing tone/style has a great deal in common with Robert Heinlein's tone/style.

Your grandfather was clearly a man who had the wisdom and character to make his life count for something. It also makes me think about how big a difference a person or persons like those 2 educators can make, not only to the young man they encouraged, but to generations after him, as he passed his wisdom on in turn.