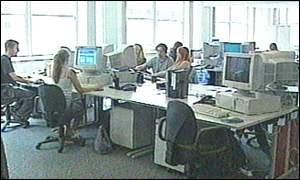 (I think Cardinal O'Fiaich would rather have this picture from the Flax Trust
than a picture of himself. Fair enough.)

He did not fear to fight, but he never failed to love.
A conversation with a friend reminded me of something from both my professional and personal life.

He is a man from Crossmaglen, the little village in South Armagh, near the border with the Republic of Ireland, which is considered the capital of the bandit country. And he, like most of the people in that part of the North of Ireland, would like to see Ireland united.

But when Thomas O'Fiaich goes off to his job, he wears a little red hat, a sash around his waist and a gold chain of office around his neck, for Thomas O'Fiaich is Cardinal of Armagh, a prince of the Church and one of the most powerful churchmen in all Ireland.

He is an Irishman who loves his nation and a Christian who lives a life of peace. It cannot be an easy combination.

Thomas Cardinal O'Fiaich was in Denver recently, on a fund-raising tour for the new University of Ulster in Coleraine, a non-denominational college dedicated to collecting and preserving the ancient manuscripts of Ireland. Even this apparently non-political mission, however, requires the packing of the entire Irish burden.

For many Irish-Americans, it comes as a shock to learn that there are Methodists, Presbyterians and Anglicans who read the Irish language and study Ireland's ancient literature. The reason for their surprise is that they assume, as many assume, that Ireland is torn between a Catholic Irish population and a Protestant population which is not truly Irish.

O'Fiaich is concerned about what he calls the misinformation which flows so freely between the United States and Ireland, particularly since so much of it is deliberately inspired by what he referred to in a Denver speech as "A country which shall remain nameless." The line got a laugh that night, but in an earlier interview he was quite frank about Britain's manipulation of the media.

"I don't think there's any other country in Western Europe where the church leaders meet so regularly as in Ireland," he says. "Yet despite all that, you never hear about (interfaith cooperation) in the United States. You only hear that Catholics and Protestants are killing each other, that they're at each others throats. Whereas, side by side with the killings that go on on the part of a small number, the vast majority are trying to build up links of fellowship and friendship, and I think it's worth emphasizing, but it's very, very rare that it's emphasized at all."

According to O'Fiaich, the British government has a vested interest in portraying the Irish in the Six Counties as violent, genocidal and somewhat psychopathic in order to justify its continued presence there.

There is also the standard problem for those in the public eye that bombings make more interesting reading than the good news.

"I think nearly all the news that comes out of Northern Ireland is simply bad news, that one hears about the murders and the killings, the kidnappings, even of racehorses, the intimidation, but you never hear at all about all the positive things that have been done to bring the churches together and to bring the people of different denominations together."

He cites as evidence a series of regular interdenominational prayer services, including priests and ministers from the various churches, which attract "a considerable number of people" and help bring the clergy together.

In this way, the pilgrims of different faiths may come to appreciate the deep feelings each of them has for his own religious traditions and to learn to respect and even share those feelings.

Also on the drawing board is an Irish ashram of sorts, an interdenominational Christian community which will serve as a retreat center and as an example of ecumenical unity.

The religious community in the Six Counties is also involved in more immediate, pressing needs. O'Fiaich is confident that the church can continue to be relevant despite the pressures of life in the ghettoes.

"There has been a big falling off of church-going in the ghetto areas in the past 20 years," he admits, acknowledging with a laugh that the problem is not confined to ghettoes or Ireland. "I think that would have come about without the Troubles, because it has affected Dublin as well as Belfast."

Still, he does not intend to change his preaching to avoid offending. "I suppose there'd be the odd person who would say 'Ach, Father's always going on about violence,' but then, I've always tried to condemn violence from both sides."

Preaching does not fill bellies, however, and with 50 percent of the men in West Belfast unemployed, the churches are aware of a need to provide some practical assistance for the body as well.

"In West Belfast, for instance, a priest there has set up a kind of cooperative movement. They've taken over a disused linen factory, so they call it the Flax Trust and they've succeeded in getting some bank loans, but most of their funding is from two countries, Germany and the United States. I've written letters of introduction to several American cardinals and bishops (for travelling fund raisers). They now have a considerable number of young people employed in various projects; they have one group apprenticed as engineers who were just taken off the streets. Otherwise, these young lads of 18 and 19 would have been cannon fodder for the IRA, ready made recruits for them "

Finally, there is the challenge of preaching to those whose bellies are full, the middleclass Irish whose natural clannishness makes for an "I'm all right, Jack" attitude.

"One thing that strikes me is that the Catholics of the South of Ire­land, the southern part of my own diocese even, they want to distance themselves from the violence of the North. They're inclined to say 'God, keep it up there, as long as it stays away from us, we're OK.' There's a certain attitude that I find a little bit unChristian in certain areas of the South.

"It's a terrible situation; the sadness and suffering that so many families in the North — Protestant and Catholic alike — have come through in recent years, and I mean, it's not a thousand miles away, it's not in Afghanistan or Iran or Iraq. We shouldn't distance ourselves from any suffering, but at least it should be easier to distance ourselves from those than from
something in Ireland. Yet they do try, even from something which I think Christian charity demands that we try to be helpful with."

The cardinal from Crossmaglen speaks as a man who has not distanced himself from his cultural roots, his religious background or his fellow human beings in a difficult, complex corner of the world.


Sometimes you can't get an interview out of your mind. Seven years ago, I saw how the light of God shines on the face of a man of God.

Cardinal Tomas O'Fiaich was Primate of Ireland, the religious leader of Catholics on both sides of the border, who served from a seat in the Northern Irish city of Armagh.

But Tomas O'Fiaich was a man of God, not because he wore a little red cap and stood up in the front of a church, but because he walked through a landscape of hatred, despair and misery, and, where he walked, there was love, hope, and cheer.

I was, at the time, a freelance writer, a sometime lecturer on Ireland and lead singer in an Irish ballad group. O'Fiaich came to Denver as part of a fundraising tour for the University of Ulster and, when my band was invited to play at the benefit, I also sold the Colorado Springs Sun on letting me interview the cardinal.

"He is an Irishman who loves his nation and a Christian who lives a life of peace," I wrote. "It cannot be an easy combination."

There are those Christians who shrink from confrontation, who abhor violence and contention regardless of cause, who turn the other cheek as submissively as a dog presents its belly in surrender.

Then there are those who claim Christianity, but abandon pacifism entirely in the face of injustice, those who support violence because it is opposing evil, and they find righteousness in that fight.

He was a man of peace, a man of God, and he would not be dragged into violence. But neither would he accept the injustice around him. He did not set his face against his nation, and he did not set his heart against those who lashed out in their despair and their poverty and the bleakness of their empty lives.

He did not fear to fight, but he never failed to love.

He embodied, in its purest form, St. Paul's most difficult admonition: He hated the sin, but loved the sinner. And he did not for a moment hesitate to preach his vision, in any place, to any audience: "I suppose there'd be the odd person who would say, 'Ach, Father's always going on about violence,' but, then, I've always tried to condemn violence from both sides," he told me.

He did not just condemn violence, however. He condemned a lazy press that glutted itself on easy stories of violence while ignoring the harder reporting.

"I don't think there's any other country in Western Europe where the church leaders meet so regularly as in Ireland," he said. "Yet, despite all that, you never hear about (interfaith cooperation) in the United States. You only hear that the Catholics and the Protestants are killing each other, that they're at each other's throats, whereas, side-by-side with the killings that go on on the part of a small number, the vast majority are trying to build up links of fellowship and friendship."

He condemned injustice. He spoke of years of discrimination, and of Catholics hired as laborers to fill quotas while the skilled jobs still went to Protestants, and of factories built out on the far edges of the cities, too far for inner-city residents to commute.

And he spoke, with hope, of job training centers, run by private charities, that tried to bring skills and opportunities to people who lived in the most grinding of multi-generational unemployment, with no hope and with no one to turn to except these small, underfunded centers, or to the paramilitaries of both sides who offered them another way to escape their tedious obscurity.

And he condemned those in Ireland who could not hear the cries, who could not see, who would not care. "It's not a thousand miles away, it's not Afghanistan or Iran or Iraq," he insisted. "We shouldn't distance ourselves from any suffering, but, at least, it should be easier to distance ourselves from those than from something in Ireland. Yet they do try, even from something which I think Christian charity demands that we try to be helpful with."

I walked into the interview expecting to learn more about Ireland. Instead, I learned, as if for the first time, about faith, hope and love, and about how the hard realities of the world can be met with the heart.