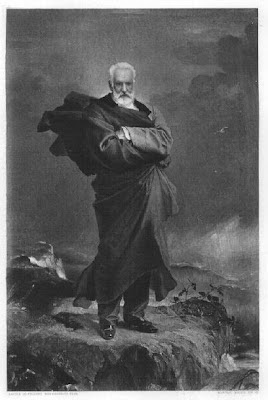 So far, it just hasn't been a Miserable summer
(I was telling my son Gabe that I'm about through reading the new translation of "War and Peace" and enjoying it very much ... but given the constraints on my time, I can only read two or three chapters a night, so I don't know how many of the insights I'm gaining are from a more dynamic translation and how many come from the slower pace. It reminded me of this column I wrote back in August of 1994.)

Boy, I hope I don't run into Victor Hugo at the grocery store. I've had his book for over a year and I still haven't gotten around to reading it.

I really meant to. I read the first chapter and really liked the tone and the flow and all, but I thought I'd better put it aside until summer. A big book like that, I wanted to be able to really settle in with it.

Yeah, well, summer's half over and I haven't even picked it up. Sorry, Vic, but you know how it goes.

It has been years since summer meant weeks of uninterrupted reading time, but it still seems like the right time to settle in with that book you've been meaning to read. Some of my favorite books are things I read over the summer: "Catch-22," "Tale of Two Cities," "The Once and Future King," "The Possessed."

The summer before last was the summer of "Anna Karenina," which turned out to be something of a disappointment, but a disappointing meal at the Tolstoy Restaurant is still pretty good grub.

I suspect the reason I haven't gotten to "Les Miserables" is because I set it out as a task, albeit one I was looking forward to, and I've been putting it off to read small things that I figured I could dash through first.

For instance, there was an odd little book I picked up at my friend Terry's used bookstore in Star Lake, which chronicles the experiences of a political reporter in Albany during the Gilded Age. The trials of Fantine and Cosette and Jean Valjean may be great literature, but a first-hand, ringside account of the break-up of the Tweed Ring and how the federal election of 1876 was stolen is pretty fascinating stuff, too.

I value the classics, but I love finding out-of-print books that were published once and then never again. I dropped into the Cornerstone during Mayor's Cup and came across a French-language instructional book written in 1917 for American soldiers headed overseas. Now, in addition to "Where is the library?" and "In the morning, Papa takes us to the Louvre Museum," I can also say, "Fix bayonets" and "Did they support the attack?"

With a little practice, I'll be able to say, "Let's go to the library and attack Papa with bayonets."

Used bookstores are a treasure chest of obscure and wonderful things. I once found a Civil War memoir, replete with eyewitness accounts of almost no action at all, since the author's regiment was on the peninsula with McClelland, and thus spent most of its time waiting for the moment to be just right, which, as Civil War buffs know, it never quite was.

I wonder if McClelland ever got around to reading "Les Miserables?"

The all-time coolest book I ever found in a used bookstore, however, was a 19th-century guidebook for young, India-bound wives of British civil servants and military officers. It's a how-to that tells what servants you will need to hire, the duties of each and how much you should pay them. It gives recipes not only for European-style dishes made with ingredients found in India, but also for household cleansers and medical remedies.

And it contains important housekeeping tips for those on the subcontinent: For example, you must put the legs of your wooden furniture in saucers of water and have your servants check the saucers daily, because the white ants will make a quick meal of unprotected end tables, and, when going up into the hills to escape the heat of summer, you should pack your dishes on the mules and let the camels carry the less fragile household goods.

If you are wondering why on earth I need to know not to pack the good china on the camels, you don't get it. Truth be told, the world is full of wonderful bits of knowledge that nobody really needs. For that matter, does anybody really need flowers or roller coasters or ice cream?

Anyway, the summer is half over and I haven't even transferred "Les Miserables" from the living room bookcase to the bedside table. There's no way I'm going to get through it before Labor Day.

I wonder what they do to you if you get caught reading out of season?

This column first appeared August 7, 1994, in the Press-Republican, Plattsburgh, N.Y. 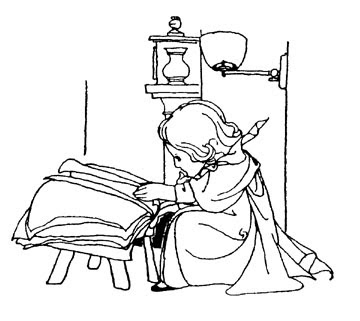 I'm glad I'm not the only one who was disappointed by Anna Karenina. Felt like being beaten over the head with the Plank O'Righteousness (as Stephan Pastis might call it) for three solid weeks; plus, Anna herself was so annoying that I was rooting for the train. I have to admit it's put me off reading any other Tolstoy, though after reading about how Gandhi was influenced by The Kingdom of God is Within You, I might have to give that a go.

Used bookstore finds have sidetracked my planned reading for about 4 decades now, way before i began to live in a used bookstore of my own - which is kind of like an alcoholic owning a bar. The advice books are the best! Emily Post in 1926 had serious warnings about the shape of one's envelope flaps.

Surely you got around to Les Miserables eventually!

There's a book based on the musical?

Goethe's Faust is far and away the best book I've read half of. I've been meaning to finish it since college. It shouldn't be difficult--it's a slim book, and even slimmer than it looks because every left-hand page is in German (I read the English translation on the right)--but I just haven't gotten to it.

I'm embarrassed about all the great books I haven't read. Every once is a while I'll run into a comic book/graphic novel fan who's amazed I don't know their favorite. "You mean you've never read V for Vendetta?! It's a classic!" My answer is, "Dude, I've never read Faulkner or Fitzgerald. After I work my way a couple hundred writers down that list of classics, then maybe I'll feel some shame for missing Alan Moore." There's just so much.

I recall an anecdote about William F. Buckley not reading Moby-Dick until very late in life and wondering afterward how he'd managed to survive that long without having it in his life. I feel that way sometimes. It is a regret.