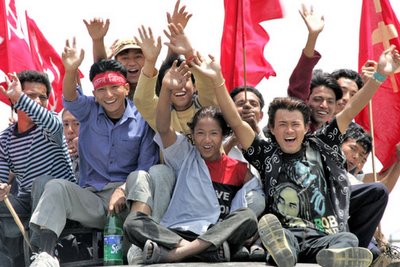 This photo, by the AP's David Longstreath, is on my desktop for no other reason than the exuberance of these kids. Seeing them joyfully waving back each day is a tonic.

Did I say "kids"? They're young, but they're engaged in serious business. These are a group of Nepalese communists celebrating the successful conclusion of the demonstrations in that country that forced the king to restore parliament. And so there were a couple of factors here I found intriguing, when Nellie covered the story a few weeks ago.

To begin with, there is the political factor. I don't think these communists are the Marxists who have been waging war in the region, but the fact remains that the Marxists did declare a ceasefire in order to make common cause with the other groups who (peacefully) sought justice in the course of the demonstrations. The potential for reconciliation is encouraging, especially if the overall mix includes more moderate socialists such as I imagine these kids are, to mitigate the intensity of those guerrillas.

The other is the Sprite bottle, the Bob Marley t-shirt and the other accoutrements of Western culture -- and the fact that a couple of these kids are pretty natty, especially the guy in the bright blue shirt with his headband folded just so. They didn't just climb out of the mountains drinking fermented yak's milk and blowing on their panpipes.

Maybe they do that, too, at other times, and I would support the move to preserve national cultures, but I think it behooves us in the West to stop thinking of these other nations in terms of their most isolated peasantry.

My friend and colleague, Rina, for example, lives on the island of Borneo, which, in our culture, is a symbol of remoteness. For us to say that something is "on Borneo" means it's practically on another planet. But she and I exchange email readily and she, being in her 20's, is more up-to-date on pop culture than I am, being in my 50's. And I am regularly surprised at how often, for example, the movies that are just opening here are also just opening there.

So a bunch of kids in Nepal are drinking Sprite and wearing Bob Marley shirts, while a young artist in Eastern Malaysia is watching "Cars" and commenting on the animation. The world is indeed getting smaller.

Here's another thing about this picture: In 1989, I interviewed Arlo Guthrie and he was commenting on the number of young people who came to his concerts and were familiar with his music to the point of silently mouthing the words to "Alice's Restaurant" while he was performing it. And they weren't all coming with their parents, either, he added.

Rather, he suggested, things were happening in Czechoslovakia (where the Soviet grip was loosening) and Berlin (where the wall was about to come down) and China (where the Tianamen Square protests were ongoing). There, he said, the young people had things going on, just as we had in the days of Vietnam and Civil Rights and the sexual revolution and so forth. And a generation from now, he suggested, it would be their children who would say, "Wow! What was it like to be young in your day?"

I've often said to my contemporaries from those olden days that we were awfully lucky to have been young in the age in which we hit our teens and twenties. For those Nepalese kids, now is that time and this is that moment. Is every day going to be as joyful as the moment in which that photo was snapped? Of course not. And our days weren't universally pleasant, either.

But the intensity of riding that roller coaster, with its incredible highs and its swooping lows and the exhilirating transitions between, is a privilege that not every generation gets to experience.

Looking at their smiling faces makes me nostalgic for the moment when my own youth and one of those rare historic moments happened to intersect.
Posted by Mike at 5:35 AM

No comment, just wanted to compliment you for a very nice essay. Thanks.